Here is one of those graphic novels that finds a way to break the medium and become something more universal…consideration as one of the greatest novels of the 20th century. Impressive? Yes, yes it is.

A lot has been said on Watchmen, even in relation to examinations of moral ethics – deontological and utilitarian perceptions.

Quick Insert on Genre or Not a Genre

There are a lot of topics, themes, and ideas that one can discuss in Watchmen. That’s what, perhaps, lets it break the “genre” (and I say this because comic books/graphic novels go above and beyond mere genre definition) and does it in flying colors. But, are superhero comics an actual genre?

Peter Coogan, in his work Superhero: The Secret Origin of a Genre, attempts to define the superhero “genre.” Why? I would argue that perhaps what Coogan is attempting to do is to lend the medium, as I like to call it, of comic books/graphic novels some credibility. This is beyond simply just Watchmen, because that novel breaks out of any real definition of what Coogan or others might call a “genre” in comic books – this comes through the story itself and the recognition too.

In counter-point to Coogan, Henry Jenkins in his blog Confessions of an Aca-Fan, points to comic book superheroes as existing beyond any simple attempt to define the “medium” as a “genre.” Superheroes are an exploration of the human condition. For as humanity is itself a complex systems of values and ideas, so to, as Jenkins points out

“…that it has maintained the capacity to build upon that varied history by pulling towards one or another genre tradition at various points in its development; that it has maintained its dominance over the comics medium by constantly absorbing and appropriating new generic materials; and that its best creators have remained acutely aware of this generic instability, shifting its core meanings and interpretations to allow for new symbolic clusters…” (http://henryjenkins.org).

Superhero comics are able to draw upon, to appropriate, whatever is needed – genre, form, idea, etc. – to explore whatever facet of the human condition any writer, artist, or fanboy/fangirl could want. Watchmen is perhaps a perfect example of what Jenkins is pointing towards.

So, getting back to moral ethics…

“What is at work in this theory, in summation, is the idea that when faced with a moral or ethical situation, one prescribes to choose to do what is right. Action chosen is the right action, sometimes disregarding the value or minimizing the value of consequences.

To put it in every day terms, if you follow this theory and you find out something horrible, like a friend’s husband is cheating on her, you would tell her, hands down, regardless of perhaps the devastating consequences that might erupt because you are doing what is considered the morally right thing”

“In summation, this theory’s primary aim centers around the idea what is in the best interest, the ‘greater good’ for everyone. One can think about the movie Hot Fuzz if you like your pop-culture movie reference and imagine Sgt. Nicholas Angel as Capt. America and the Town Council as Iron Man and everyone else.

Or, to put it in everyday terms take the previous scenario of you finding out that your friend’s husband is cheating on her. Instead of coming right out and telling her you would stop, take into account perhaps the best situation to approach this. How can you let her know in a way that does not blow things up? Perhaps, for the sake of better ‘consequences’ you might not even tell her. Instead you might confront her husband, get him to tell her or knock it off. Ultimately, the aim is do what is best for everyone, the ‘greater good.’”

Jumping into Watchmen, I would argue there is a symmetry defined by THREE pairs, each one representing a measure of degrees in the understanding and application of moral ethical perceptions like deontology and utilitarianism.

Rorschach and The Comedian 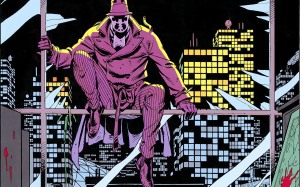 This seems like an odd pair, and yet strangely a kin at the same time. On might laugh at the notion of the Comedian (aka Edward Blake) as someone with any sense of morality or even ethical morality, but one could argue that, despite his nihilistic, self-destructive tendencies, The Comedian has a strange and twisted integrity based on consistency. Of course, the Comedian dies at the beginning of Watchmen and all revelations on his character come via flashbacks and what one might see as “secondary sources” of memories and encounters that those “alive” had with him.

Perhaps the Comedians strongest demonstration of a perhaps “hidden” ethical code comes when Moloch, one of his adversaries, reveals to Rorschach that the Comedian died because he found out about Ozymandias’s plans to save the world by nearly destroying it.

Rorschach (aka Walter Kovacs), in contrast, but similar to the Comedian, has a strange ethical morality of his own. He is violent, brutal, and vicious, but he acts without reservation to punish, in extreme, those he judges to be evil and in the wrong. It is for these actions that Rorschach represents perhaps the greatest threat, next to the Comedian, to Ozymandias’s plans to “remake” the world. 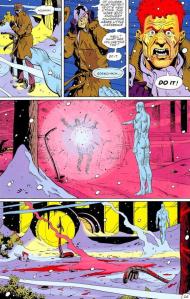 Elimination. It was perhaps the only option left for Rorschach and it was because, unlike Dr. Manhattan and Ozymandias, and to an extent Night Owl and Silk Spectre, he could not and would not allow for what happened to go unchallenged.

Night Owl and the Silk Spectre

It is perhaps interesting, and perhaps the most accurate representation in Watchmen of the everyday person that one finds identified in Daniel Dreiberg (aka Night Owl II) and Laurie (Jupiter) Juspeczyk (Silk Spectre II).

Identifying them by their real identities rather than their superhero code names is fitting. One, because it points out the reality that in Watchmen both of them want to find “normal” lives in some sense beyond their “superhero identities” (though they get drawn back in like someone in need of a drug fix or because of perhaps a slightly erotic sensation of pleasure that comes from dressing up as someone else, like role-playing). Two, because both these characters are actually second incarnations of a superhero mantel of the universe they occupy. Daniel took over the mantel from Hollis Mason, who was the original Night Owl and member of the Minutemen (precursor group from the 1930’s and 40’s) who was his mentor. Laurie is the daughter of Sally Jupiter, also of the Minutemen and the original Silk Spectre – their relationship is not, NOT an easy one (reminds me of  early conflict between Com. Adama and Apollo in the more recent incarnation of Battlestar Galactica).

These two characters, though not in the beginning of the graphic novel, become a pair in a romantic notion as well. They bond together, kind of becoming the ones who might also make it out of the whole mess with something to live for too.

Though at the end of the novel, both Daniel and Laurie are aware of what Ozymandias has done, they are not necessarily a threat to the plan and willing to simply move on, to live their lives. They are willing to compromise. Good or bad, they are willing, like many people in the world to see the shades of gray and find a way to move on – granted they do it under new identities and looks at the end of the graphic novel.

Like the Deontological pairing of the Comedian and Rorschach, the pairing of Ozymandias (aka Adrian Veidt) and Dr. Manhattan (aka Jon Osterman…though that identity is dead, he really is only Dr. Manhattan anymore) makes for strange bedfellows. Where Ozymandias adopts the role less of a superhero (more like a super villain) and more of one seeking, at any cost (perhaps where Marvel Comic’s Illuminati under Jonathan Hickman’s vision may go) to save the world from itself. Dr. Manhattan, by contrast is part of the problem, he also, in comparison, becomes kind of part of an uneasy solution as well.

Ozymandias’s actions represent extreme utilitarianism twisted to align with his “smartest man in the world” ego that elevates himself into a god-like position towards humanity. Ozymandias sees his actions via the consequences and feels that he should and does do whatever it takes – including staging a fake alien invasion, using manufactured biological weapons, that kills millions of people and destroys most of New York City, all while killing those who helped create the project – in order to force the United States and the Soviet Union to stand down from nuclear annihilation.

Is Ozymandias right to do what he does?

Most ethical philosophers would disagree with Ozymandias I suspect. The key issue is that he has twisted and manipulated the idea of “the greater good” to suit his own ego, his own view of humanity’s future. He is not wrong to want to stop nuclear holocaust and escalation towards that end, but he does so by actually pushing the United States and the Soviet Union all the way to the brink (he does this by driving Dr. Manhattan from the Earth, metaphorically pulling the pin out of the grenade). In order to achieve his ends, Ozymandias engages in acts that seek to remove all those who could oppose him (the Comedian he murders and Rorschach he gets locked up).

His actions take him from a superhero, to that of a super-villain. Superheroes, in their purest forms, do not make compromises in the lives of people to achieve a greater outcome without reluctance. Ozymandias does it willingly and readily. He represents, as do the rest of the Watchmen, more complicated depictions and corruptions of the superhero medium.

Dr. Manhattan (formerly Dr. Jon Osterman who was disintegrated by an Intrinsic Field Subtractor at a government research facility in 1959, then reconstituted as a being of energy) represents perhaps the one character in Watchmen who has the “powers” of a superhero. He is, unlike most of the other, endowed with real powers. He is also, of all the characters, far, far less in touch with humanity.

His role in Watchmen serves as both an object in the way of Ozymandias’s plans (for which Ozymandias manipulates to attempt to remove him from the Earth, since he cannot destroy him or kill him) and as a strange, almost omniscient, observer of the events at work (like the Watcher of the Marvel Universe). Dr. Manhattan’s role as observer is what defines his utilitarian stance in the narrative. He operates within the bounds of logical reasoning and scientific/quantum mechanics. The world to him is a study in probabilities and measuring of the best possible outcomes. When Ozymandias reveals to him his plans and what he did (to drive him off of Earth) Dr. Manhattan’s logic allows him to accept Ozymandias’s decisions as correct.

However, there is a twist, a place in Dr. Manhattan that acknowledges the infinite probability of the universe that he sees as a “quantum observer” that causes him to warn Ozymandias that perhaps all his plans may not have succeeded.

This image in fact brings us, in symmetry, back to the first page of Watchmen, circling us back from what Dr. Manhattan has noted about how “nothing ever ends.”

So, the question and struggle of ethical morality is a continuing dialogic exchange. It is an interaction that allows and has a give and take in society. Of all the characters, the complex and twisted characters, in Watchmen there exists a strong and ongoing debate. This is what makes any novel, or graphic novel, timeless. This debate continues today, it will continue tomorrow, to paraphrase Dr. Manhattan, this too will “never end.” 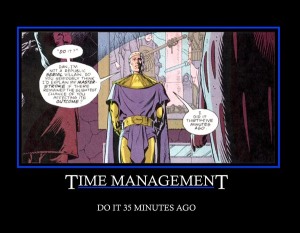 Personal Artwork to Expand My Own Horizons

Taking On and Reducing Misunderstanding One Podcast at a Time

The view from inside the fridge